Religious Minorities Band Together for Tolerance 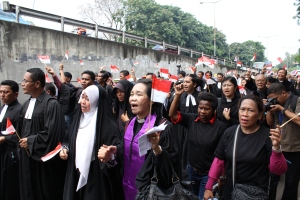 So often the victims of intolerance in Indonesia, Christians, Ahmadiyah and Shia Muslims on Monday marched together in Central Jakarta to urge the government to take a stand against religiously motivated violence and discrimination.

The 300 protesters held a shared prayer service before singing the national anthem as the marched along Jalan Gerag Pemuda toward the gates of the House of Representatives.

Pastor Torang Simanjuntak, from the HKBP Taman Sari church in Bekasi, which was demolished after an order from the regional government on March 21, was among the demonstrators.

The pastor said he was there to send a message to President Susilo Bambang Yudhoyono.

“I can’t give you an answer to what the government is thinking about this situation, but in a few areas across Indonesia, our brothers and sisters are hoping that the government will take the right step toward religion,” Torang explained, adding that his congregation continues to hold services where their church once stood despite it being destroyed almost three weeks ago.

“We are very simple, and we just hope that the government can guide us to help minorities in the country,” the pastor said.

Monday’s protest comes after international rights group Human Rights Watch released a damning report in February criticizing the Indonesian government for its ignorant and at times “complicit” approach toward increasing instances of religious discrimination and violence.

Anna Nenoharan, a pastor from the Evangelical Christian Church (Gekindo) in Jatimulya, Bekasi, was also present at Monday’s demonstration.

In 2005, she was stabbed with a knife by members from the Islamic Defenders Front (FPI) who claimed the church did not hold a valid building permit to hold services.

Not long after the attack, Anna and her congregation were evicted from their church, which was then demolished. The pastor has since been a vocal advocate for religious tolerance.

“I was knifed in my neck and my tummy,” Anna explained at the protest.

“The FPI attacked me and the law didn’t do anything to protect me. They [the FPI] are still free and yet they attacked our church and ruined all our equipment. We have protested in front of the state palace but nothing has been done.”

Despite suffering such a vicious attack and enduring continual threats from the vigilante group, Anna said that she was not intimidated and was not afraid to fight for the rights of religious minorities.

“Our church can be pulled down but our spirit will always remain high,” she said.

“The government has done nothing and they just act deaf and turn a blind eye. But we believe that a miracle of god will fix this. We are ashamed of our government but we are proud to be Indonesian.”

Emilia Az, a Shia Muslim from the non-profit organization Organization of Ahlulbayt for Social Support and Education (OASE), which provides tools for the resolution of conflict between religious groups, expressed the importance for minorities to band together.

“I don’t only just work for Shia, I’ve worked for the churches and for the Ahmadiyahs. We have to fight back for our rights. Everybody has their right to live in peace,” Emilia said at the protest.

Emilia, who has spent time mediating with hard-liners to persuade them to adopt more peaceful and tolerant attitudes, said that through dialogue a better understanding can be reached.

However, she admitted that without a strong stance from the government and tougher law enforcement this approach is limited.

“I believe that these extremists are being ordered by others outside of Indonesia. I don’t believe this is really Indonesia as this is not part of our habits, our social life or our identity,” she said.

In February, Bahrul Hayat, secretary general of the Ministry of Religious Affairs, said that “Indonesia is a good place to see religious harmony.”

The bureaucrat admitted that there were cases of religious violence in the country but that it was not a cause for alarm.

The ministry did not respond to a request for comment on Monday’s protest.