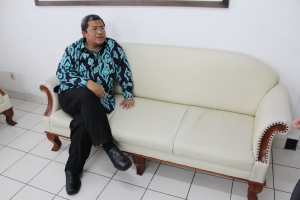 While Indonesia grapples with the a rise in acts of violence against religious minorities across the country, several rights groups have pointed to West Java as a significant hotspot for intolerance.

In the past four months, a Christian minister from Sumedang was jailed, a church building was demolished in Bekasi, an Ahmadiyah mosque in Pondok Gede was sealed with 30 congregation members still inside and three Ahmadiyah mosques were shut down and damaged in Cianjur.

The Wahid Institute recorded 102 cases of intolerance and violations against religious minorities in 2012, with 40 incidents occurring in West Java.

But in spite of these incidents, West Java Governor Ahmad Heryawan, who was recently re-elected for a second term, is adamant that religious intolerance is not an issue in the province.

“In my opinion this is the most tolerant province. There is no problem, except in the corners of West Java. The corner of a small area is where the problems occur, and the situation cannot be characterized as intolerant,” Ahmad told the Jakarta Globe on Thursday.

While Ahmad said that the current regulation to obtain a permit for a house of worship was already suitable — Article 28 from the 2006 ministerial decree stipulates that local leaders must help facilitate the process to obtain a permit — he said that he hoped the issues associated with houses of worship could be resolved over the next five years.

“I have to take my hat off to my Catholic friends; they are very orderly and they never made a house of worship without permission,” Ahmad said.

“With most Protestants, there are no problems either, the conflict often only happens with the Congregation of Batak Protestant Churches [Protestant HKBP].”

In the latest attack in the province, three Ahmadiyah mosques in different subdistricts of Cianjur were shut down and on Friday damaged by members of the Islamic Defenders Front (FPI), who claimed they did not hold a valid building permit.

During an interview a day earlier, Ahmad said violent attacks on the Ahmadiyah had subsided since the gubernatorial election on Feb. 24, adding that he wanted to protect all religions, including Islam.

“When there is a group of people who want to destroy from within, we do need to protect [Islam],” Ahmad said.

“We want to tolerate the Ahmadis … but when they change the fundamental beliefs of Islam, saying that they are Muslims, it’s a big issue today. There are rules specifically about the Ahmadiyah. If there is someone teaching and spreading the teachings of a new prophet after the prophet Muhammad, then that is a wrong action.”

Ahmad Suaedy, a researcher from the Wahid Institute, an organization that promotes development of moderate Islam in Indonesia, said that West Java was Indonesia’s most prolific source of religious intolerance and violence over the past five years.

The researcher cited West Java’s large Muslim community as one of the main reasons behind the recent spate of acts of intolerance against religious minorities.

“The intolerance and violence are not only against the HKBP, but also against other Islamic groups such as the Ahmadiyah, and against traditional Islam, local traditions and indigenous people,” Suaedy explained.

“West Java for the past five years has been led by a governor from the conservative Islamic PKS [Prosperous Justice Party]. When [Ahmad] was elected governor, he banned some artistic traditions of West Java, namely Jaipongan, because it was considered contrary to Islam.”

The governor said he enforced the regulation prohibiting Ahmadiyah from teaching their beliefs, adding that the police were responsible for any criminal acts against minorities.

“Yes, violence is a criminal act. Whenever it happens to anyone we leave it to the authorities, namely the police,” Ahmad said.

While reports surfaced that Ahmad had signed an agreement with the local branch of the FPI during his recent gubernatorial campaign, the governor strongly denied the claims.

“There was no agreement. There were some members from the FPI who visited me but I greeted them the same as any other guests,” he said.

“There was no agreement, they were just guests visiting me.”

Bahrul Hayat, secretary general of the Religious Affairs Ministry, previously said that he thought it was a good idea for the local government to sign an agreement with the FPI.

“I think if the local government signs an agreement with the FPI it is good, because the government should keep a strong position on the regulation. I see this in a positive way. You don’t have to see this in a negative way,” he said.

Bonar Tigor Naipospos, deputy director of the Setara Institute, a think tank, said Ahmad and the central government refused to take responsibility for preventing or prosecuting acts of violence against minority groups.

While Bonar said that a high number of acts of religious intolerance occurred in West Java, he acknowledged the problem existed in other areas, as well.

“In West Java, we see Christians and Ahmadis attacked more because the majority of the population are Muslims. The problem is not just for one group but for all denominations. The local community is welcoming, but not the fundamentalist groups who use violence and hate speech,” Bonar said.

“In places like North Sulawesi, Bali and Flores [East Nusa Tenggara], where Muslims are minority, there are fewer cases, cases of not being able to build a mosque. But the protests don’t come from Islamic groups. It comes from the locals.”