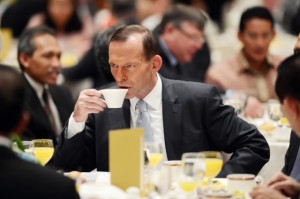 “I don’t think many Australian companies have looked at other opportunities in Indonesia as they are confined to the resources industries and to a certain segment of the agriculture industry, which is cattle, and look at nothing beyond that,” Noke Kiroyan, the deputy chairman of the Indonesian Chamber of Commerce and Industry (Kadin), said on Tuesday.

He said he believed that business relations between the two countries should be on a “broader basis” and not just be confined to certain sectors.

“I think that the potential is there, but I’ve been maintaining that for some time now. I don’t think that many Australian consumer product companies have looked at the market potential. Or even the travel or hospitality industry,” he said.

Noke, a former chairman of the Indonesian subsidiary of Australian mining giant Rio Tinto, added that Indonesian companies had also “missed out” on opportunities in Australia.

Abbott wrapped up on Tuesday his first foreign visit since becoming prime minister last month, pushing his plan to strengthen ties through investment in sectors such as education and financial services to a crowd of business and government delegates in Jakarta.

The prime minister, joined by a delegation of leaders from Australia’s health, agriculture and infrastructure sectors, commented on Indonesia’s rise in disposable incomes and acknowledged that the country’s growing middle class would soon be demanding more goods and services.

Abbott said two-way trade between Australia and Indonesia was only about $15 billion a year, which is lower than Australia’s bilateral trade volume with its significantly smaller neighbor, New Zealand.

“It may be many years before individual Indonesians’ standard of living equals that of Australians, but it probably won’t be very long before Indonesia’s total GDP dwarfs ours,” Abbott said.

Australia’s relationship with Indonesia has been rocky over the past few years, with a beef trade dispute hurting Australia’s cattle industry following the previous government’s suspension of live exports in 2011 after images of animal cruelty in Indonesian abattoirs were broadcast in Australia.

Abbott attacked the Labor government’s reaction to the public outrage over the footage, during a joint press conference with President Susilo Bambang Yudhoyono on Monday, and stressed that Australia would never again “jeopardize” the food supply of Indonesia.

The prime minister on Tuesday reinforced his point and said he was determined to put the beef dispute behind them, a promise that was welcomed by business delegates.

“He has addressed the live cattle export ban, which is one of the two major issues in the room today,” said Shamim Razavi from Norton Rose Fulbright Australia, a global business law service.

“That’s the easiest issue to deal with. The elephant in the room is the asylum-seeker issue … I don’t think this is an issue that can be solved in one visit,” he said, adding that Abbott’s symbolism of making Indonesia his first port of call as prime minister was an important sign of “mending bridges.”

Despite Abbott’s strong stance to “stop the boats” as part of his election commitment, the prime minister did not directly address whether he would follow through with his Operation Sovereign Borders policy — which will see the navy turn asylum-seeker boats back to Indonesia when it is deemed safe.

Both leaders agreed on Monday that people smuggling was not a problem that could be resolved by one country alone and vowed to work together to address the problem through bilateral and regional forums.

“I made it very clear that this is an issue of sovereignty for us and I think I can say that on the Indonesian side, there was a willingness to be as cooperative as was possible to ensure that this evil scourge is ended as quickly as we can,” Abbott said at a press conference on Tuesday, on his private discussion with Yudhoyono.

The prime minister added that the matter was “bad for both countries” and that it was now time to develop “even stronger cooperation.”

However, questions still remain on the leaders’ commitment to follow through on their agreement to find a cooperative regional solution.

Hikmahanto Juwana, an international affairs expert at the University of Indonesia, expressed concern that Abbott was dodging the issue, while Yudhoyono had succeeded in not letting the prime minister discuss his policy.

“The policy is unilateral, hostile and has the potential of infringing Indonesia’s sovereignty,” the scholar said, adding that Yudhoyono was right to say Indonesia was also a victim.

“He wanted to dismiss Abbott’s government from thinking that Australia was the only victim because Indonesia would not and could not stop the asylum seekers.”

Hariman Prakosa, the president director of Djawa Baru, a private Indonesian company focusing on general trade for sales in Indonesia, attended the meeting on Tuesday and said Abbott needed to resolve the asylum-seeker issue before he thought about strengthening business ties.

Despite Australian Prime Minister Tony Abbott’s push to strengthen ties with Indonesia during a meeting with business and government delegates on Tuesday morning, a press conference following the breakfast was restricted to the Australian media.

Local media, including the Jakarta Globe, were not allowed to attend the press briefing that saw Abbott and Australia’s foreign minister, Julie Bishop, speak with Australian media.

Umar Idris, the chairman of the Jakarta branch of the Alliance of Independent Journalists (AJI), said it was the first time he had heard of a case where local journalists had been excluded from a conference, and condemned the move.

“Australia has good press freedom and so they should practice that in Indonesia as well,” Umar told the Globe. “Tony Abbott’s visit is important for the Indonesian media, and journalists should be granted open, equal access.”

The move comes as the Australian government has enforced a media blackout where it will now only hold one press conference a week for Australian media on asylum-seeker issues.

However, following the tragic sinking of an Australia-bound boat off of the coast of West Java on Friday, which resulted in the deaths of at least 36 Middle Eastern asylum seekers, Australian Immigration Minister Scott Morrison broke the media silence.

He rejected reports from survivors made to the Sydney Morning Herald that a rescue was delayed by 24 hours, issuing a statement on Sunday saying that Australia did “respond to all such events with great professionalism and a keenly felt sense of duty, as they did on this occasion.”

Check out the print version here.