Indonesian Youth Vote for Their Future 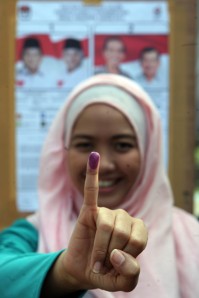 A voter shows her inked finger after casting a ballot during the presidential election in Depok, Greater Jakarta area, on July 9, 2014. (JG Photo/Jurnasyanto Sukarno)

In an election that’s expected in many ways to be largely defined by the younger population, Indonesia’s youth headed to the polls this morning to vote for their future. Thirty percent of the 190 million people registered to vote are under the age of 30.

Robby Wijaya, who voted in his second presidential election today, wasn’t too keen on either candidate, but he opted for Joko Widodo simply because he didn’t like the alternative. “Prabowo definitely is not fit to bear the responsibility of a president, no one wants a tyrant to be their leader. And for Jokowi, he is not ready to compete in this election, since he needs more experience than just managing one or two cities,” says the 23-year-old from West Jakarta.

First-time voter Jasie Widjaja also voted for Jokowi because she believed in his vision. “He is a trustworthy man and if we compare him with his competitor, he is way better,” said the 18-year-old.

Her older sister Nedra added that she was throwing her support behind Jokowi because he had good plans for the country.  “Indonesia needs to be fixed with systematic plans, which is perfect for us as I imagine we are like lazy teens with a messy bedroom and Joko and JK [vice presidential candidate Jusuf Kalla] have these plans to make these teens grow up and change,” explained the 23-year-od school teacher, who graduated from Atma Jaya Catholic University last year.

On the other hand, nutrition student Tyagita Shinta voted for Joko’s rival Prabowo Subianto because she thought he had a strong background. “I’m choosing Prabowo because he is firm and he has a military background,” said the 19-year-old, who added that her friends were divided between both candidates. “With an army background and Hatta Rajasa [as vice president], the former economics minister, he will make the country balanced.”

All hail the hashtag

In a campaign that has created a social media storm complete with music videos, quotable graphics and hashtags, the younger generation has been captivated by this new-age election fever.

Enda Nasution, a respected social media commentator, says that social media in this election has been a game changer in a nation which is regarded as one of the top 5 social media markets in the world.

Interestingly, Enda said one of the big differences brought about by social media in this campaign was that it allowed the spread of information that wouldn’t typically be considered news by traditional media outlets — including rumors and provocative smear campaigns — which has heavily influenced an impressionable young audience.

As of noon on Wednesday, four out of ten worldwide trending Twitter topics were related to the Indonesian presidential election.

Abdul Qowi Bastian of BeritaSatu’s Ayo Vote, an initiative to encourage young people to participate in the election, says officially there are no statistics on how many young people are expected to vote in today’s election.

A survey conducted by the Indonesian Survey Institute (LSI) following April’s legislative elections estimated that voter turnout among the 17-21 age group was 94%. Actual numbers are likely to be closer to the general turnout of 73%.

However, the participation in today’s presidential election is expected to be higher, says Abdul.

“A challenge of course, especially in the legislative election, was to engage the youth to vote. It’s easier for them to vote in the presidential election because there are only two candidates and most youth have already made up their minds.”

However, for some young voters the campaign has become an overwhelming circus, one where bureaucracy has impacted their decision not to vote.

For Jakarta-based 21-year-old Tiara Chairunnissa Salim, who was leaning toward Prabowo as her pick, the difficulty of traveling to Sumatra where she was born convinced her to abstain. In Indonesia individuals must report to their local polling station at least three days prior to the vote in order to be eligible to participate in a different constituency.

“I’ve actually never registered to vote because I’ve moved around so much in my life and I’m from Sumatra and cannot go all the way back, the administration is just too difficult,” Tiara said.

Admittedly, the University of Indonesia student said, there was an option last week for her to register to vote on campus, but work commitments got in the way as well as a lack of belief in her country’s political system.

“In the end I really was not interested to vote. It’s so confusing which candidate has the best policies — they have no concrete achievements, both seem to be arguing and so are their supporters,” she said.

Click here for the original article published on The Jakarta Globe.