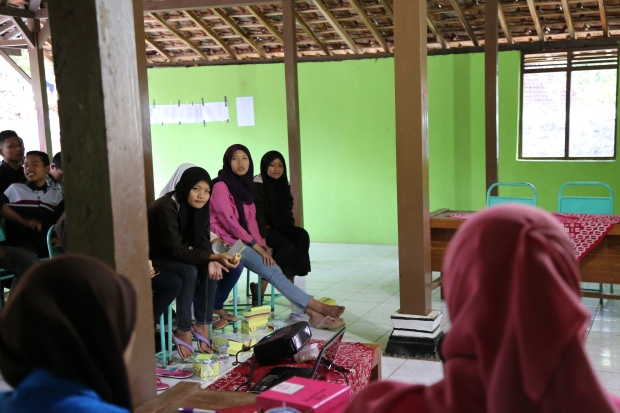 Students listen in at Unala’s Youthgether event in Gunung Kidul – a village south of the city of Yogyakarta. UNFPA Indonesia/Sandra Siagian

Learning the basics of sexual and reproductive health (SRH) from a Hollywood film might not seem like the most conventional way to access facts about your body, but for some young Indonesians, this is just one of the options they are left with to access information about their health.

It was a movie that prompted Angie*, a 23-year-old university student from Yogyakarta, Indonesia, to seek a doctor to talk about sexually-transmitted diseases and discuss modern contraceptive options that she had never heard of.

This is a video that I filmed, edited and produced in Yogyakarta, Indonesia for UNFPA Indonesia.

“I usually found information about my health and body on the internet but I didn’t always know what I was looking for,” explained Angie, who admits she would feel uncomfortable talking about private issues with her general physician. “I didn’t even know I could talk about these issues with a specific doctor.”

For Wati*, a senior high-school student from Yogyakarta, her primary source of information was her mum and friends at school. 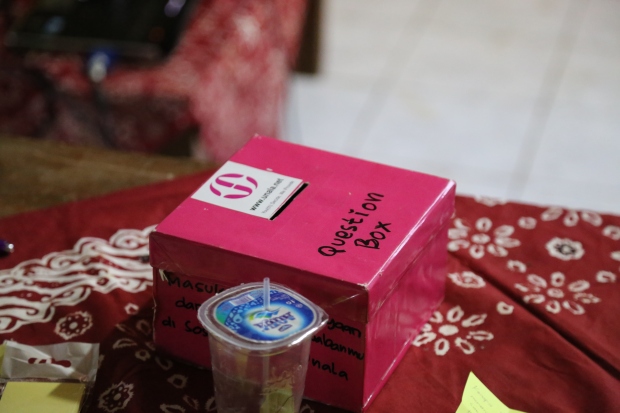 “I’ve never accessed reproductive health services. I’ve only heard about it from my mum and friends. We don’t learn about it at school,” she added.

Angie and Wati’s experiences are not uncommon in Indonesia, where every year approximately 1.7 million women under the age of 24 give birth, including nearly half a million teenagers.

A student asks a question during Unala’s Youthgether event in Gunung Kidul – a village south of the city of Yogyakarta. UNFPA Indonesia/Sandra Siagian

In July 2014, UNFPA Indonesia launched a private sector-led SRH services model specifically for youth in Yogyakarta. The project was launched together with HRH GKR Mangkubumi, the Royal Princess of the Kingdom of Yogyakarta, who has been acknowledged for her leadership and dedication to young people and is also a strong supporter of the model. The social franchising project Unala – which comes from Sanskrit and means your ability to make decisions – aims to establish a network of private service providers working closely with youth networks to provide young people with comprehensive information and access to affordable and stigma-free SRH services, including contraceptives and counselling. There are currently nine private physicians working in seven Unala-branded clinics across Yogyakarta, where consultations are offered at half price with the use of a voucher system.

“There are still a limited number of reproductive health information services which are not judgmental and youth friendly,” says Dr. Danang Adriyanto, a Unala-affiliated general practitioner, who has worked with the project since its inception. “Without reliable and trustworthy sexual and reproductive health services for young people there’s a risk that adolescents will ignore health issues and not seek the right medical help.”

In October 2015, UNFPA unveiled the second stage of Unala. While the primary focus had been on unmarried young people of school age – through school-based talks, social media and the use of vouchers by Unala doctors and youth workers – the second stage will focus on reaching out to young  married couples.

“The needs of young married people are sometimes overlooked,” explained UNFPA Indonesia’s ASRH and Youth National Programme Officer, Dr. Margaretha Sitanggang, adding that if the scheme was successful the model could be replicated nationwide. “This is the situation in some areas across Indonesia and we would like to be able to provide this group with a comprehensive reproductive health network.”

Recent newlywed Anggraini Sariastuti, 24, says she and her husband found it difficult to find information and access SRH services before they were married, adding that a pre-marital check was only offered as an option and wasn’t a requirement when they registered their marriage at the religious court.

“It was too expensive for me to have a HIV test and a mammography exam before I was married but I knew that it was important to have a health check. My husband and I went to a private hospital to just have a general medical check-up instead,” explained Anggraini. “It was quite expensive but luckily my husband understood the importance of maintaining our health. The community ignores the needs of young married couples, who need access to SRH information and services so I think it’s important for youth-friendly health services like Unala to be available for us.”

Having already used the services of Unala several times, Angie admits that she no longer needs to rely on movies or the internet for SRH information and she also doesn’t feel embarrassed to talk about her issues either.

“I now realise that everyone has the right to access SRH information and services. It’s important. It’s not just about menstruation, or if someone is sexually active or not. Adolescents can face many problems and if they ignore the problems their conditions could get worse,” explained the university student. “It would be great if there were more services like Unala and opportunities for it to expand the network of doctors to other cities in Indonesia.”

Wati, who had joined a youth event organized by Unala to learn more about SRH in her hometown of Gunung Kidul – a rural village located around two hours from the city of Yogyakarta – echoed Ange’s wish to provide more services to adolescents.

“Information is very limited so it’s important that young people have access and don’t become victims to unknown diseases,” she said, adding that she hoped more doctors could provide services in villages. “Because it’s not just about preventing diseases, we also need to know how to keep our bodies healthy.”