Uncovering the Bigger Picture of Violence Against Women in Indonesia 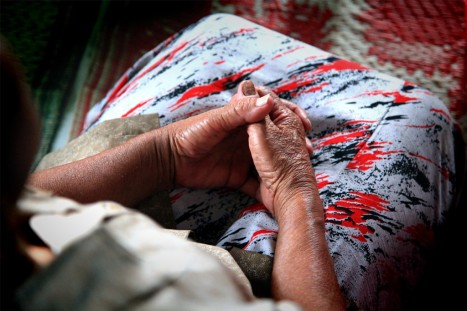 Ruth* was in her 30s when her husband first started physically and sexually assaulting her. As the domestic abuse continued over the years, the mother-of-two tried but failed to get help.  She reported the violence to the police but they just told her to try and solve the problem with her husband.

“The police told me that there was a law protecting women and children but they advised me to think about it because if I took legal action, my husband would go to jail,” recalls Ruth, who lives in a village of around 350 people in Papua’s Jayapura district and is now 52 years old. “If my husband was jailed, I wouldn’t have food. At the end I relented and went home.”

Indonesia passed a Law on Domestic Violence in 2004 (UU 23/2004), which states “victims, most of whom are female, should receive protection from the state and/or community to avoid domestic violence or any threats of violence”.

But it wasn’t until 2011 that Ruth completely understood her rights to protection when a Papuan-based non-governmental agency LP3A, the Foundation for Studies and Empowerment of Women and Children, visited her village of Benyom. The NGO hosted a workshop via Pujaprema – a crisis centre and network for women and children, facilitated by the provincial office of women’s empowerment – and explained the regulation and their rights clearly. Men and boys were also provided information, which Ruth says helped change her husband’s behavior.

In Jayapura, lifetime prevalence of emotional, economic, physical or sexual intimate partner violence perpetration is 60 percent, according to findings from the “UN Multi-Country Study (MCS) on Men and Violence. Frequent quarrelling with a partner, depression and alcohol abuse and witnessing the abuse of their mother in childhood were some of the risk factors attributed to intimate partner violence perpetration.

“Patriarchal culture is common, where men feel more powerful than women,” explained Slamet Soebroto, a member and former chairman of Pujaprema. “In Papua, some men feel that through the dowry they are able to purchase the women. And some women in Papua are dependent on men and they are afraid to be left as they think they won’t be able to eat.”

Learning about her rights and the law helped empower Ruth to speak up for change. She is now a member of her village’s community watch system acting as one of the representatives to report signs of violence.

To address this issue, the Government of Indonesia will conduct the first nationwide survey on violence against women this September to identify the prevalence rate of violence against women to take the first steps in implementing policies in the prevention and response stages. UNFPA Indonesia is supporting the Government in providing the necessary training and assistance for the planning, methodology, training, analysis and report.

“Many cases of violence against women across Indonesia are not reported, meaning the limited data we have does not portray the true magnitude of the problem,” explains Dr. Ir. Subandi MSc, Deputy Minister for Human and Societal Development and Cultural Affairs at Bappenas.

Bappenas will provide support by ensuring the survey results will be used as the baseline for Indonesia’s Mid-Term Development Plan (RPJMN 2015-2019). The ministry will also coordinate the programme response from relevant ministries.

“So far the numbers only reflect the women who have come forward to report cases of violence,” Dr. Subandi added. “This VAW survey will help us identify the magnitude of the problem in Indonesia and the results, along with the availability of government data, will help us design appropriate policies to prevent and respond to violence against women.”

Promoting gender equity, equality and the empowerment of women is a core mandate of UNFPA. Starting under UNFPA Indonesia’s 8th Country Programme (2011-2015), emphasis in evidence-based advocacy to achieve gender equality and eliminate violence against women and girls was placed on by advancing the agenda for broader male involvement as a prevention strategy. In addition, UNFPA, through its 9th Country Programme (2016-2020), will continue to support strengthening government roles in inter-sectoral coordination mechanism for gender-based violence prevention and response, including the health sector response.